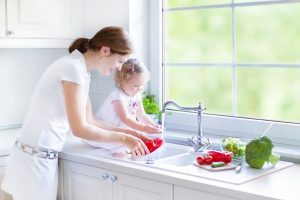 Most residential kitchens are equipped with a garbage disposal to easily clean up food waste. If your home is one of them, you likely can’t picture cooking and cleaning without one. Whether it’s unfinished meals or kitchen scraps, a lot goes into the garbage disposal so that you don’t have to worry about anything stinking up your trash can. However, this reliance on your garbage disposal system can get you in a little trouble.

As plumbers, we understand that not every homeowner understands that a garbage disposal can’t actually be used for all “garbage.” That’s just not how a garbage disposal works. Many people picture this component as a “blender” and assume that sharp blades rotate around to chop up food before sending it down the drain, but that’s not quite right.

Your disposal system uses a motor that powers an impeller whose “blades” are really not sharp at all. There is a grind ring attached, though, and that is what grinds down food as centrifugal force breaks it apart.

So, things like plastic, paper, and other wrappers won’t get broken down in a garbage disposal. What they might do instead is slip through the cracks into your drains, posing a risk to your drain and sewer lines.

Hard food items can include things such as meat bones and fruit pits. Your garbage disposal grinds down food before sending it down the drain, and won’t be very effective at all on these types of materials. Think about it this way: if you wouldn’t be able to chew it, then it doesn’t belong in the garbage disposal!

Keep in mind the texture of the food you’re putting down your sink drain and how it might interact with your garbage disposal. Will it create problems for the mechanism?

For instance, stringy or fibrous foods are a pretty common problem for garbage disposals. Think about things like asparagus and celery. These could possibly wrap around the motor and cause it to jam up. Onion skins and corn husks also cause problems. Additionally, if something feels like paper it will act like paper in your disposal.

Beyond the Garbage Disposal

Since we’re talking about your kitchen sink, now’s a good time to mention a few other items that shouldn’t go down your drain, even if the garbage disposal can handle it. This includes: