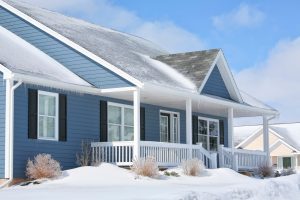 WHY THEY’RE A PROBLEM

Frozen pipes can occur at any portion of your plumbing system that isn’t sufficiently insulated, as well as in pipes outside the home, such as those used for your sprinkler system. When the water freezes, it blocks the flow of water through the pipes, preventing you from making use of the affected outlets.

That’s only the tip of the iceberg, however. Ice expands, which means the frozen water will press up against the sides of your pipe. If the pipes burst, ice and water will damage the surrounding materials — including drywall, furniture, and electrical components — and turn a fairly simple repair into a huge (and expensive) hassle.

The first and most obvious sign of a frozen pipe is turning on the outlets with only a trickle of water coming out, or no water coming out at all. Frozen pipes also need low temperatures to manifest — though not necessarily freezing, since the cold metal of the pipes can cause the water to freeze even if the outdoor temperature is higher than 32 degrees.

Other signs can include, but are not limited to, the following:

PREVENTION AS WELL AS REPAIR

When you spot the signs of frozen pipes, shut off the water to the affected section and call in a plumber to get it resolved. Attempting to fix the problem yourself could result in burst pipes, which becomes exponentially more difficult to fix.

In addition to getting the water flowing again, the plumber can make some solid suggestions on the best way to prevent future frozen pipes and implement solutions in many cases. This can include insulating vulnerable pipes, repiping parts of the home to move them through warmer areas, and even just leaving the faucets on a trickle to keep the water flowing. That turns a simple repair call into a swift way to stop the problem before it starts in winters to come.

The professionals at BZ Dependable Plumbing & Heating Inc. are standing by to help you with your frozen pipes!